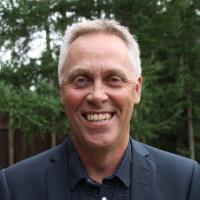 Over the years at the University of Lund and at Astra Arcus, Malmsten’s research focused on polymers in solution and at interfaces. Particular emphasis was placed on the interfacial behavior of nonionic polymers, as well as its consequences for forces between polymer-coated surfaces and for steric stabilization of dispersions by such polymers (1,2). Together with colleagues at the Royal Institute of Technology and at the University of Lund, he was among the first in Sweden to employ surface analytical techniques such as ellipsometry, surface force measurements, and neutron scattering on such systems, and was able to demonstrate both interfacial orientation effects and effects of interfacial crowding for surface interactions. Based on thus clarified mechanisms of the temperature dependence displayed by such systems, he was also able to design a method in which this temperature dependence of adsorbed polymers was employed to immobilize proteins to inherently protein-rejecting surfaces, of significant interest, e.g., in solid phase diagnostics and biosensors.  This technology was subsequently out-licenced to a diagnostics company.

Parallel to the work on polymers at interfaces, Malmsten worked on clarifying the self-assembly of PEO-PPO-PEO block copolymers, primarily in solution, but also at interfaces (3,4). The majority of this work was experimental, but the research contained also theoretical studies through collaborations at Lund University, notably using mean-field models for polymers in solution and at interfaces. Together, this resulted in a series of papers analyzing effects of solutes, homopolymers, and water diffusion, which have all generated considerable citation numbers, and still do so today, some 20 years later. In 1993, Malmsten was awarded the Nordic Surface Chemistry Price for his research in this area.

After his move to YKI, emphasis was shifted to proteins at interfaces, employing the same experimental techniques used previously for polymers. Within this area, Malmsten demonstrated how ellipsometry in particular could be used to follow the structural progression during adsorbed layer formation, which led to an understanding of effects such as interfacial crowding, re-orientations, and competitive spreading (5). In a second line of research, the role of protein adsorption in biomedical applications was investigated, e.g., clarifying the interplay between serum protein adsorption and bloodstream circulation of lipid-based drug delivery systems (6), and dissecting factors determining the protein rejection displayed by surfaces containing poly(ethylene glycol) chains (7). Also based on methodologies and the concepts derived from the more fundamental research on adsorbed protein layer formation, Malmsten, together with colleagues at the Free University of Berlin (now Charité), designed an atheroschlerosis biosensor, with whichmodel studies of the deposition of various lipoproteins (atherosclerotic risk factors) as well as clinical patient samples was performed, correlating the results obtained with a range of other biomarkers, as well as with clinical results on atherosclerotic risk and effects of drugs in patient groups (8). In a series of investigations, this approach was found to have potential for evaluating candidate drugs, assessing therapies, and monitoring atherosclerotic risk, e.g., for atherosclerosis in diabetes type II patients, as well as secondary atherosclerosis in bypass operation patients. In 2002, Malmsten was awarded the prestidgeous Langmuir Lecture Award from ACS for his research on protein adsorption.

After moving to Uppsala University in 2003, Malmsten’s research shifted to amphiphilic peptides, an area of intense current interest, e.g., as a result of multi-resistance development against antibiotics. Based on a biological perspective, in which constant microbial colonialization results in proteolytic degradation of endogenous proteins and the release of a host of peptides, a number of endogenous peptides were identified, which display high antimicrobial and anti-inflammatory activity, but little or no toxicity on eukaryotic cells. These peptides, which have been identified from sequences originating from complement proteins, contact activation proteins, matrix proteins, coagulation factors, growth factors, and other serum proteins, have been investigated regarding both their mode-of-action and biological properties in collaboration with colleagues at Lund University. In addition, end-tagging such peptides with short aromatic amino acid stretches was demonstrated as a way to significantly increase potency and selectivity of such peptides (9). Troughout, a broad approach was used, spanning from detailed biophysical studies, to biological tests on the cellular level, and experiments in animal models (9,10). For one of the peptides identified, two successful Phase I/II clinical trials have been performed through a start-up company formed together with a colleague at Lund University and Karolinska Development AB. Following this, attention moved to clarifying the interaction of anti-inflammatory peptides with non-lipid membrane components, notably microbial liposaccharides (LPS and LTA), playing a key role for inflammation triggered by bacteria and fungi. Building on methodologies established for investigating peptide interaction with lipid membranes, this work expanded to such polysaccharides and their different structural moieties. Through this, mechanistic insight could be obtained, notably in relation to direct scavenging of inflammation-triggering lipid A by direct peptide binding, peptide-induced membrane scavenging of LPS, and phagocytosis-facilitating LPS aggregate disruption, the latter two providing alternative pathways to the inflammation-triggering one (11). Furthermore, mechanistic studies led to identification of conditions, under which PEGylation of anti-inflammatory peptides allows adverse effects relating to toxicity, serum protein binding and bloodstream clearence to be suppressed, while maintaining the anti-inflammatory effects of such peptides (12). Again, this fundamental work was accompanied by more applied efforts, in which peptides were evaluated regarding their anti-inflammatory potency through a start-up company formed together with a colleague at Lund University and LUBio. Through this, a collaboration was established with a larger pharmaceutical company for bringing the lead peptide into clinical trials.

In a second leg of research, properties of microgels have been addressed, notably as carriers of peptides and proteins. Microgels offer interesting possibilities in this context due to an "abrupt responsiveness" (swelling/deswelling, non-adhesion/adhesion, stability/aggregation, release/encapsulation) related to their macromolecular nature. Together with colleagues at Uppsala University, Malmsten established an experimental platform for investigating such systems in detail, based on micromanipulator-assisted light and fluorescence microscopy for detailed studies of microgel swelling/deswelling kinetics, and confocal microscopy for investigation of peptide distribution and dynamics within microgels. Through these and various additional experimental tools, as well as theoretical models, Malmsten employed the peptide-design experience developed in the membrane work to microgels. Through controlled structural variations on the single amino acid level, this enabled elucidation of effects of peptide charge (distribution), hydrophobicity (distribution), length, conformational stability, end-caps, and cyclization on microgel loading, distribution, and release, together with effects of gel properties and ambient conditions (13). Also factors affecting biodegradation of peptides loaded into microgels, and of microgels containing peptides/proteins, have been elucidated (14). In 2012, Malmsten was awarded the Norblad-Ekstrand Medal for his work on amphiphilic peptides.

Furthermore, attention has been placed on nanomaterials as delivery systems for challenging drugs. For example, Malmsten et al. introduced the concept of hybrid nanoparticles, prepared by precipitation of polymer-based nanoparticles by sub- or super-critical CO2, as carriers for protein kinase inhibitors, enabling delivery of high doses of these very challenging but therapeutically extremely important drugs. Following structure-function analyses of composition and processing, such hybrid nanoparticles were demonstrated to result in 8-fold increase in oral bioavailability in dogs (compared to the existing product on the market) for nilotinib (15). Subsequently, a similar 5-10-fold increase in oral bioavailability in dogs was demonstrated in follow-up studies for a number of key protein kinase inhibitors. In addition, hybrid nanoparticles were demonstrated in a series of clinical trials on humans to result in excellent bioavailability. Considering the dominating role of protein kinase inhibitors in cancer therapeutics, reaching increased performance of such drugs is potentially very important. Again, parallel to the academic research, development aspects of tumor delivery systems were addressed in a start-up company formed together with colleagues at Uppsala University.

During the last few years, attention has increasingly shifted to delivery systems for antimicrobial and anti-inflammatory peptides, aiming at addressing challenging infections such as those characterized by biofilm formation and/or extensive proteolytic activity (e.g., burn wounds and cystic fibrosis), or for infections in which bacteria are localized within macrophages (e.g., tuberculosis). Here, attention has been placed on nanogels (16,17), as well as on inorganic nanoparticles, such as mesoporous silica and nanoclays, have been investigated with a battery of biophysical methods in combination with biological effect studies of antimicrobial effect, cell toxicity, and protection from proteolytic degradation (18,19). In addition to membrane disruption, the latter studies have demonstrated the importance also of bacterial flocculation as a mechanism for infection confinement, of potential therapeutic interest (20). In 2018, Malmsten was recognized with the D.O. Shah Lecture for this work.

After his move to the University of Copenhagen late 2016, research focus on drug delivery has been further accentuated, notably in relation to cutaneous drug delivery of both amphilic peptides and low molecular weight drugs, where current efforts focus on the combination of advanced analytical techniques, novel delivery systems, and novel biological models as a tool to reach improved therapeutic outcome.

1.         Ellipsometry Studies of the Adsorption of Cellulose Ethers.

M. Malmsten and B. Lindman,

M. Malmsten and B. Lindman,

7.         Effects of Chain Density on Inhibition of Protein Adsorption by Poly(ethylene glycol) Based Coatings.

10.       An Electrochemical Study on the Interaction between Complement-Derived Peptides and DOPC Mono- and Bilayers

L. Ringstad, E. Protopapa, B. Lindholm-Sethson, A. Schmidtchen, A. Nelson and M. Malmsten

12.       Effect of PEGylation on Membrane and Lipopolysaccharide Interactions of Host Defense Peptides

13.       Effect of Charge Density on the Interaction between Cationic Peptides and Oppositely Charged Microgels

16.       Membrane Interactions of Microgels as Carriers of Antimicrobial Peptides

L. Nyström, A. Strömstedt, A. Schmidtchen and M. Malmsten

20.       Interaction of laponite with membrane components – consequences for bacterial aggregation and infaction confinement.